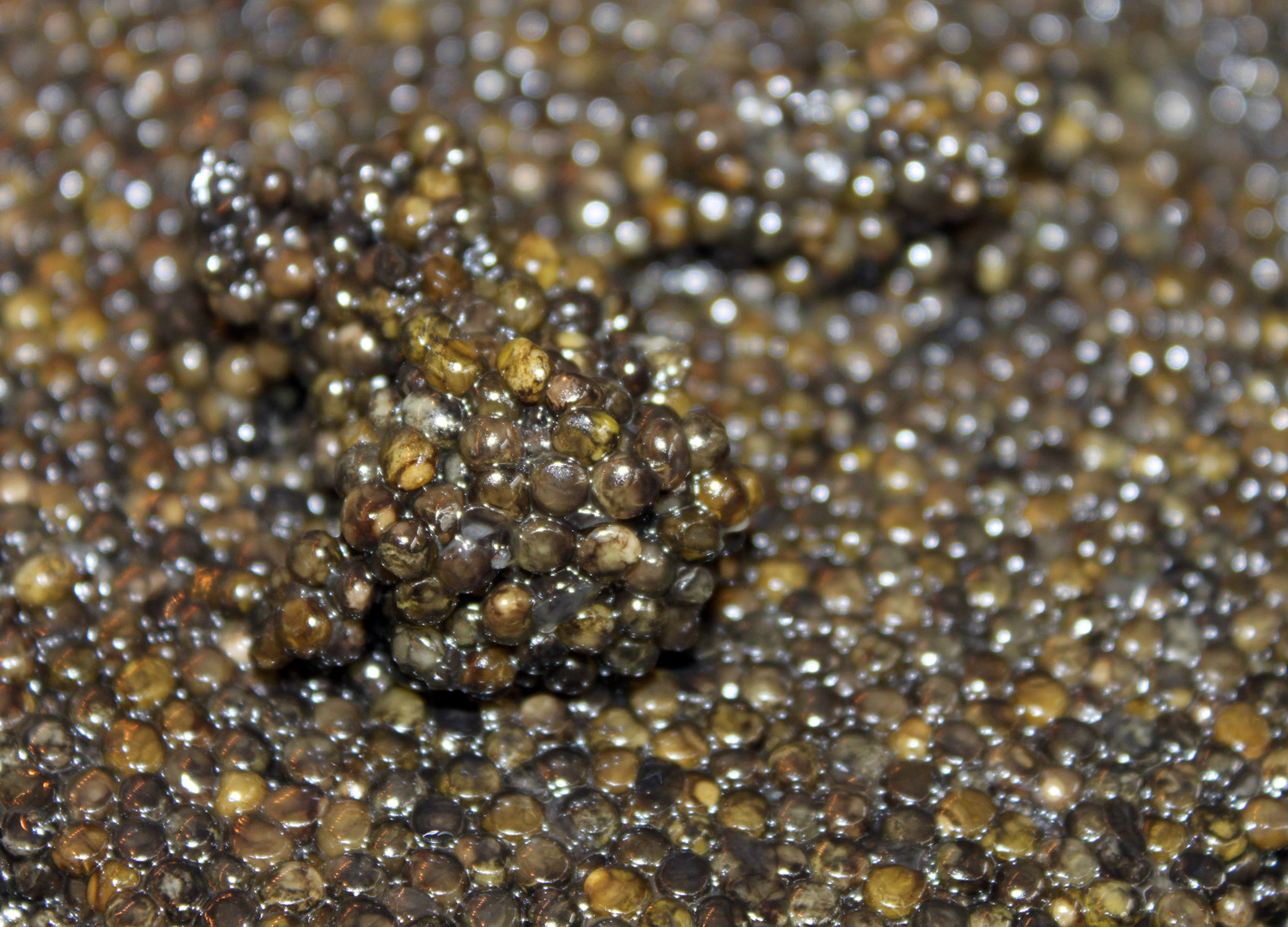 More than any other foodstuff, caviar embodies the notion of celebration.  It is rare and expensive, requires delicate handling and is something of an acquired taste.  It’s natural affinity for Champagne and traditional home at the start of great meals only add to its natural aura of luxury and status.

Since the days when a handful of clever promoters created a passion for caviar amongst the wealthy of Europe – raising what was once a peasant food into the most rarified culinary realms – wherever prosperity has arrived on the globe so has a taste for the salted roe of the sturgeon.  In the 20th century, high demand and high prices incited the producers of caviar – both sanctioned and illegal – to push wild stocks of the sturgeon to the brink.  Fortunately, after years of strict regulation and innovation, a rebound in wild sturgeon stocks is a real possibility and the market for caviar is almost entirely served by producers who farm sturgeon in a sustainable fashion.

For all the notions of luxury that we associate with sturgeon eggs, the parent fish is generally agreed to be unattractive.  The sturgeon’s looks are primitive, with rows of bony spines covering its thick-skinned body.  Its prehistoric looks are no accident, as sturgeon first appears in the fossil record around 250 million years ago and have changed little since that time.  They possess a potent blend of traits that allow them to live extremely long lives – sometimes upwards of 100 years – and grow to enormous proportions – the largest recorded beluga weighed 4,570 pounds with a length of 28 feet.

There are as many as twenty-seven species of sturgeon, varying greatly in size and appearance, found throughout the Northern Hemisphere.  Like the salmon, they are anadromous, living their lives in ocean’s salt water but returning to the freshwater rivers of their birth to spawn.  Unfortunately, thanks in part to their long lives, a typical female sturgeon in the wild will not reach sexual maturity until she is 16 years old.  This means that wild sturgeon have to successfully survive almost two decades before they can either perpetuate their species or feed the desires of the caviar-consuming public.

Considering the longstanding global demand for caviar, their endangered status across the world is thus not surprising.  What was once the standard by which all other caviars were judged, wild beluga caviar from the Caspian Sea in Central Asia, has virtually disappeared. Despite efforts to better regulate sturgeon harvests, severe overfishing during the communist rule of Russia and rabid poaching since the fall of the USSR pushed the Caspian fishery to the brink.

Tins of caviar, ready for tasting.

In the 19th century technological developments allowed caviar-producing firms to harvest wherever sizable populations of sturgeon could be found and export their wares to the primary European market.  During this time North America was the world’s leader in caviar production but It took a mere thirty years to wipe out the once abundant sturgeon populations in America’s eastern rivers – a cautionary tale that unfortunately would not be heeded in other parts of the world.  When the sturgeons were gone, the manufacturers simply moved on; some to the great lakes and the rivers of the west coast, others to Russia.  Sturgeon fisheries throughout the world have followed a similar pattern.

In today’s markets, following the fall of communism and rising living standards around the globe, demand for caviar remains high.  However we have finally acknowledged the fact that we cannot supply this demand by continually overfishing wild sturgeon.  In American, domestic production disappeared along with the sturgeon but the nation’s gourmands retained a taste for caviar that spurred new thinking about how it might be produced.

On the northwest side of Sacramento, California’s capitol, the rivers once throbbed with a species known as white sturgeon.  Though decimated in the American caviar rush, at the end of the last century restrictions on commercial sturgeon fishing allowed populations to slowly return to their ideal habitat in the Sacramento River Delta.  Today driving out across the Delta, one encounters an industrial site with plain, functional buildings nestled amongst the levees that might be mistaken for a water-treatment facilities if not for a tanker truck parked in front with “live fish” stenciled on its side.

Sturgeon in their tank.

This is Sterling Caviar, where Peter Struffenegger and his team tend tanks that teem with sturgeon — a million fish of all ages in just one facility.  Sterling is just one of several firms that have settled in the Sacramento Delta to develop and perfect the domestication of the native white sturgeon.  Though highly adaptable in the wild, sturgeons require a very specific range of conditions to prosper and mature in captivity.  As it happens, because the Delta is part of their historic range, they have discovered that well water on the property emerges from the ground at the ideal temperature for year-round sturgeon growth.

The typical 16 years that it takes a wild female sturgeon to reach sexual maturity are reduced to 7 at Sterling.  Struffenegger, a marine biologist by training, monitors the fish’s entire life cycle.  It is a commercial enterprise, but while he and his team produce high-quality caviar and sturgeon meat, they also continue to learn about the sturgeon itself and how best to efficiently breed the fish in captivity.

The harvest of the eggs is a delicate process, even when done on a large scale.  Female sturgeons that carry the roe are stunned and held in separate tanks.  The eggs must be taken as quickly as possible after the fish is killed, despite the thick skin and sharp spines.  At Sterling, expert butchers use razor-sharp blades to slit the fish’s belly and gently remove the egg sacks, running down the length of the fish’s midsection on either side.

In a sterile, refrigerated room, workers wearing masks and gloves carefully separate the eggs from their membranes using the centuries-old method of gently rubbing the sacs against a screen. The eggs are salted to taste and packed into the metal tins ubiquitous in caviar production.  The tins are stored for several weeks before distribution, allowing the salt to penetrate the eggs and the caviar’s flavor to develop.

When the day’s production at Sterling is complete, a pallet containing stacks of caviar tins is deposited by forklift into a refrigerated room.  The cement floor and fluorescent lights are a world away from the white linen and mother-of-pearl that will one day provide the final stage for this caviar.  However the care, concern and craft that characterize the caviar’s production – from the birth of a sturgeon fry through its long life and finally to its harvest – are joined in the preparation and enjoyment of caviar at the hands of great chefs to the memorable delight of their fortunate guests.